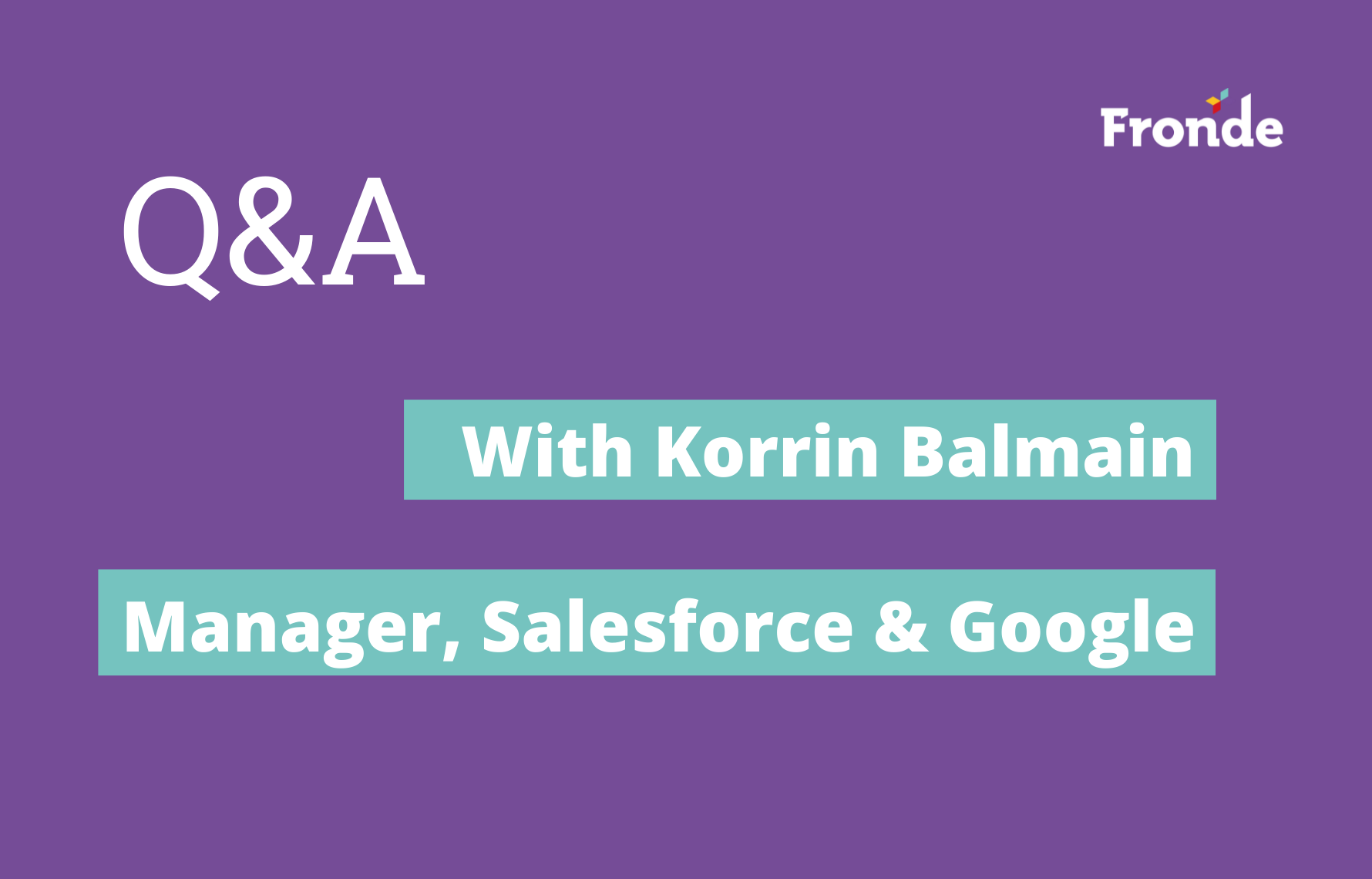 Korrin Balmain has been with us for 12 years and is Fronde's Manager, Salesforce & Google.

Having recently celebrated 12 years at Fronde, Korrin Balmain has had three different roles with the business. Now she is managing the Google and Salesforce practices, but wears many hats. “I’m involved in various pre-sales stages, sometimes you’ll find me project managing my team's work, and other times you’ll find me being a change manager as part of the project team.”

How long have you worked in the IT industry?

I remember using Pegasus Mail, does that count? Around 23 years and just celebrated 12 years at Fronde. I think silk or linen is a traditional anniversary gift, ha!

How did you get started in IT?

Completely by accident. I started off as a Desktop Publisher, using PageMaker 5.5 and found that people approached me regularly for help, because they couldn’t get what they needed from Clippy - wow that character was annoying! I became the local Desktop Support person, then moved on to a Service Desk role. I took on a number of Team Lead roles and found that leading people was what I was looking for. I began to understand through the various roles that technology was the easy part, and wow, how challenging is it to work with people! People hold their own set of personal values and beliefs and it’s important as colleagues, vendors and customers that we respect that.

How many roles have you had at Fronde?

I think I have three different roles, all with title changes to reflect what is happening in the industry. I started as a Project Manager which then became Change Manager, where I got to appreciate that any form of IT investment also requires an investment into people and process. Then I became the practice manager for Google and then began to manage the Salesforce practice.

What do you remember from your first few days at Fronde?

My first few days were exhausting. I moved from using a Blackberry to an HTC Magic and from Windows to Google. I started to think, “What have I done?” Acronyms were flying around and I struggled to keep up. I loved it, it was fast-paced and action-packed - and that’s me. I love a bit of organised chaos.

What do you enjoy about working at Fronde?
I was actually turned down the first time I applied for a role at Fronde, they didn’t think it was for me. They said to me, “We’ll put your CV into our talent pool and let you know if something turns up”. Of course I had heard it before and thought to myself, “Well that's not happening”. Approximately two months later I received a call from Fronde saying there was a Project Manager role and they felt I would be great. 12 years later, I’m still here.

What attracted you initially, and what makes you stay?

I’m a real people person and I really appreciate the people here, and the people in my team help to form that family environment we work in. I’m pretty biassed, but my teams have helped me to form the leader that I am today. Working with a diverse group of amazingly talented people and seeing them grow is what motivates me.

What challenges have you had to overcome during your IT career?

A challenge I had was being a part of a male-dominated leadership team and struggling to fit in and to speak up. I was the only female (at the time) and at times I found it daunting. It was my own personal fears that were holding me back. When I understood “it was me, not them”, I started to speak up more and felt like I belonged as a key member of the leadership team. Now, most people know me to be upfront and mindful but honest.

What technologies have had the greatest impact on your life, both personally and professionally?

For those of you that know me are waiting for me to say it…it’s Google. Through the various moves I’ve made across countries, or sitting in an ER with my children, having to complete MIQ or being in a pandemic. I’ve never once been limited by Google’s technology. I’ve stayed close to my teams, colleagues and customers whenever I’ve needed to.

Have you experienced major life events during your time at Fronde?  Tell us about them:

Who inspires you? Why?
Honestly, I don’t have a particular person. What inspires me is for people to be humble, transparent and themselves. Work out what your personal values and beliefs are and be true to them. 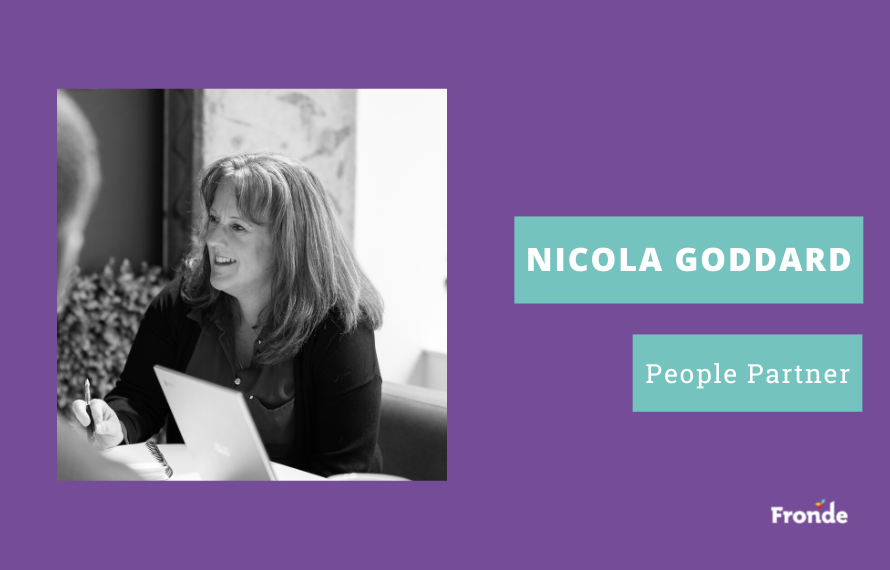 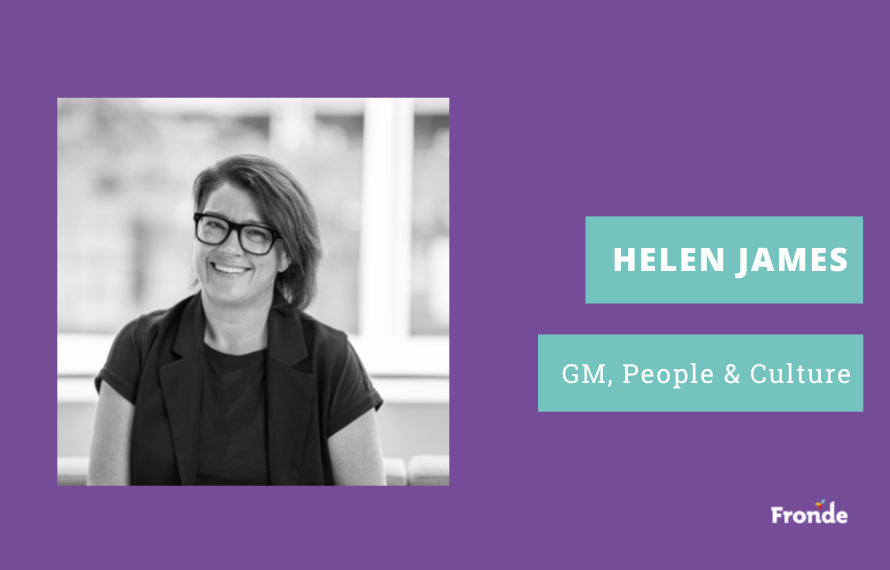 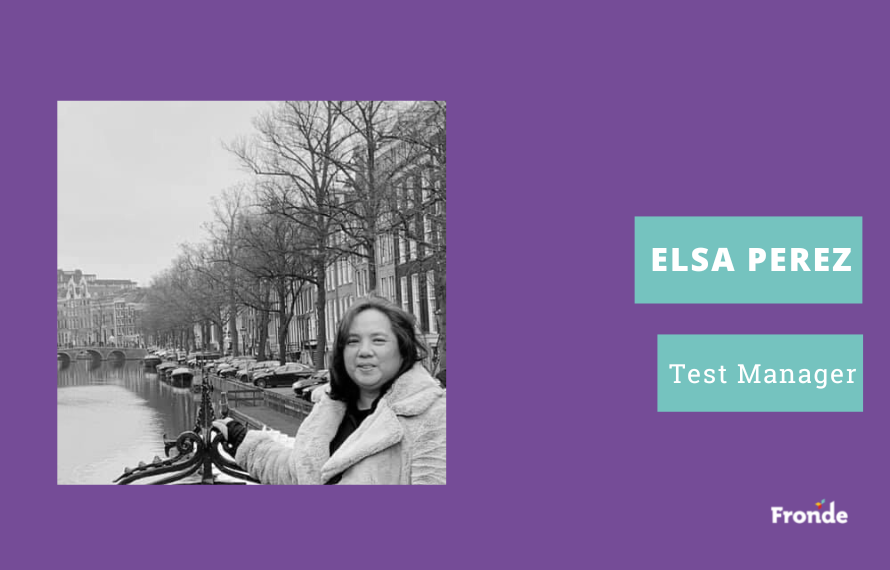