There is something "fundamentally different" about Chrome and what it could offer organisations, Fronde says.

Based in Customs St East, the lab provides an opportunity for visitors to experience a new way of working using Google's enterprise solutions and infrastructure: Chrome Enterprise and G Suite.

Valentine was not sure how to describe it but said there was something "fundamentally different" about Chrome and what if could offer organisations.

The simple to use and deploy technology was going to be one of the next big things and one of the fundamental transformations about how technology would be delivered to staff and to customers, Valentine said.

Kiwi Ben Goodger, a co-founder of Chrome, keynoted the event live from California, where he is based in Google's headquarters.

Goodger, who attained a bachelor's degree in computer engineering from Auckland University, explained how he had worked on the declining Netscape 6 browser in the late 1990s, which was a "miserable failure".

A few of the Netscape people then went on to launch Firefox.

Goodger then joined Google to help develop Chrome, which had been successful beyond Google's wildest dreams.

"We are thirty years into a fundamental transformation of computing," Goodger said.

There was a vision people began to have in the 1990s that cloud computing could be achieved. The web had already transformed the way people interacted with technology.

"People were spending more and more time in the browser," he said. "Why not have a complete computing experience, end to end, like that?"

That simplified and streamlined management and delivered an intuitive and easy to use computer experience, he said. Now mobile apps can be brought into that as well.

Other browsers, such as Microsoft's Edge, were also now moving over to the Chrome stack.

Goodger said the next phase would be ongoing improvement in the range of powerful capabilities delivered over the web, which would require new APIs, file systems and advanced graphics as well as systems to explain to users what was happening with their data.

The Racing Industry Transformation Agency (RITA), formerly the NZ Racing Board and soon to become the TAB, then spoke to show how it was using Chrome to transform service and deliver easy-to-use and secure front-end Chrome devices to service customers and comply with new anti-money laundering laws.

Chromebooks was one part of the puzzle, but G Suite was the other, RITA's GM of technology Simon Mackay said.

G Suite delivered real-time communication and collaboration which enabled a culture that could fail fast and iterate quickly with a single source of truth, he said.

The "small but perfectly formed lab", he said, would demonstrate how Chrome Enterprise technology delivered both return on investment and productivity.

Businesses were increasingly embracing the opportunity to enhance both the way their staff worked and how they served their customers as the Google Chrome Enterprise and G Suite ecosystem continued to grow, he said.

According to analyst firm Forrester, the ecosystem offered 295 per cent return on investment, three hours saved per device for workers each week and more than $477,000 in IT management cost savings.

“Technology is profoundly changing how we interact and is enabling new ways of working but research indicates three out of four employees remained trapped in the 90s work practices," Delamore said.

This impacted the effectiveness of their work and the experience they are able to deliver to customers.

“Fronde has been delivering G Suite technologies since they launched in 2005 and the recent introduction of Chromebook hardware means Google can now support new ways of communicating – everything from business’s conference rooms through to digital signage and kiosk tablets in reception."

This article was originally posted on Resellernews.co.nz. 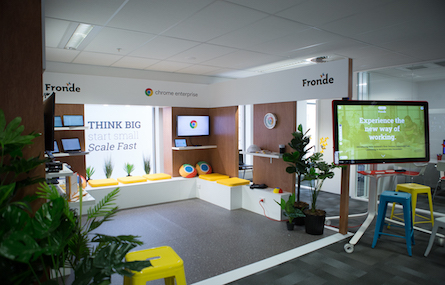